Bonds In Conversation : 4th July Was The Start Not The End ..of the war (UPDATED)

Today is a US holiday. Independence Day was the day the Revolutionary War started and not the day it ended. The war lasted between 1776 till 1783.

The big picture is starting to emerge and it does not appear to be that rosy for the medium term, a trifle alarming for the bond markets which saw 5 glorious months of hard hitting issuance now wiped out in much of their value.

Pimco‘s flagship Total Return Fund saw a record 9.9 billion in withdrawals end June. Some allege that it represented 29% of total US bond fund withdrawals (unverified) for the month. What does that imply for a spillover with the promise of Tapering to start in September.

Some trends the Singapore market appears to have missed.

Locally, I am speculating we are starting to see some worrying signs. The Hyflux consent solicitation should be no cause for unnecessary alarm but the cracks in covenants are starting to show. We had Aspial some weeks ago attempting the same. Covenants are meant to protect bond holders from weaker issuers who would otherwise find it hard to tap bond markets and we certainly had quite a bunch of them this year including a surprisingly shocking new OXLEY issue this week (no price available on this one due to new smokescreen camouflage tactic) !

You really do not need a default to drive down a bond’s price. Just look at Olam. As long as the company’s cost of borrowing increases, the bond price will fall naturally.

With all that is going on, I would be hard pressed to say if we can expect a bond rally anytime soon. It will be a long road ahead.

Leaving you with the prices (all unverified because I am between doing groceries and cooking dinner) and I hope you find the column on the bond’s credit gains (estimated) informative especially in times like these when extra caution is to be paid on credit worthiness.

Do take note that several call features should now be ignored in evaluating the bonds, as in the case of Genting perp (otc tranche). The call price of 100 should not hold when the bond is trading at 91.50 level which is higher yielding than their coupon refix of 6%. The disparity between the OTC and the retail tranche has really widened out but I will reserve my comments on that.

P.S. : Just been made aware that the PCRT bond had a similar consent solicitation in June to amend certain details of their trust deed as well (other details unavailable)
Only 1 issue out there.
Appending the chart of bond price. 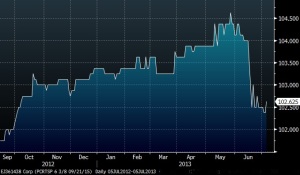 SG 52 : Amazon Prime Has Arrived, Welcome To The Future

The Mental Health Problems of Debt and Despair
Read Next

REHASH : The Economists in Feb Said USDSGD at 1.2 ! GDP Next Week

Bonds In Conversation : 4th July Was The Start Not The End ..of the war (UPDATED)