Time to revisit that good old Fengshui prediction for the Year of the Black Water Snake and time to read the fine print because if you were like me, you would have skimmed through the entire piece, raring to go in the new year and taking only the main points. 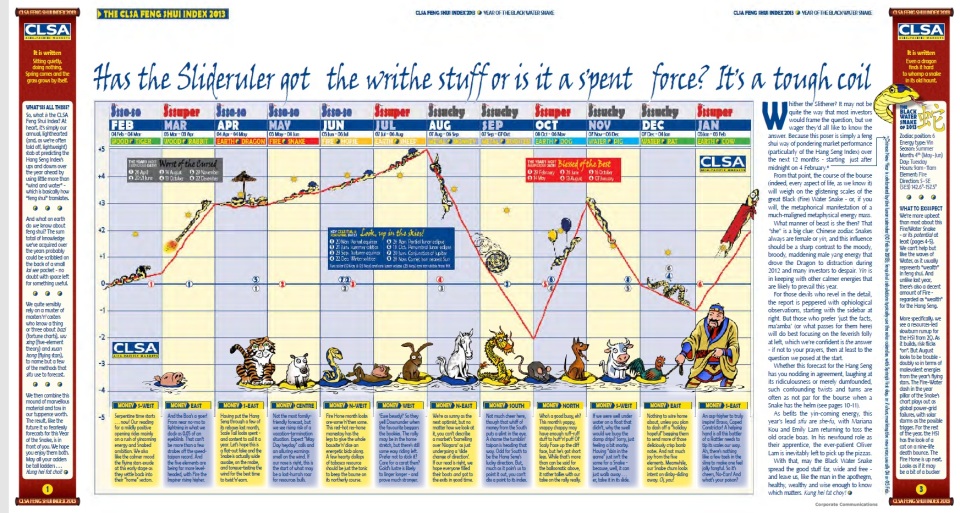 They have been RIGHT so far, in the rally of the stock indices and they forecast it to stretch all the way to end July but WRONG, not a resource driven rally (its TECH). Then again, they are talking about HSI.

“More specifically, we see a resources-led slowburn runup for the HSI from 2Q. As it builds, risk flicks “on”. But August looks to be trouble – doubly so in terms of malevolent energies from the year’s flying stars. The Fire-Water clash in the year
pillar of the Snake’s chart plays out as global power-grid failures, with solar
storms as the possible trigger. For the rest of the year, the HSI has the look of a cat on a nine-life death bounce. The Fire Horse is up next. Looks as if it may be a bit of a bucker.”

The GOLD call is DEAD WRONG. April, they had said was top monthly pick for GOLD and look what happened. Unless they are saying that April is the top ? (Don’t worry, Aug is supposed to be wonderful for GOLD, again which makes sense if stocks are topping out that month ?).

Does it mean that their bubble forecast is wrong as well ?

“And the next bubble to burst will be . . . US municipal and corporate bonds! Tick, tick, tick!”

Volatility is RIGHT as well as disasters.

We had the Boston bombings recently and the crisis in Syria raging on.

“Xuan kong or flyingstars analysis is like an air-traffic controller’s log of the year’s key energies or “stars”. It never hurts to know if something big and ugly is about to land
in your backyard. At first blush, the return of the nine stars to their home sectors
this year suggests a more settled period.
On the other hand (always seems to be one of them in feng shui), this once-in-adecade event means the stellar energy is boosted, so we may see more volatility!”

Dire Warning in the finer print…..

“The end of this year marks the half-way point along our current 60-year zodiac cycle. Should be downhill all the way from here . . .”

Snake year has been wonderful with BoJ saving the day, augmenting the progress made in the US recovery.

For the skeptics, CLSA challenges you to another leg up all the way to August. Be mindful of the fengshui master !

← The Archbishop and The Pope Speaks – Wealth Redistribution Ahead
Ad Hoc Commentary – Malaysian elections, the incumbent will likely stay in power →