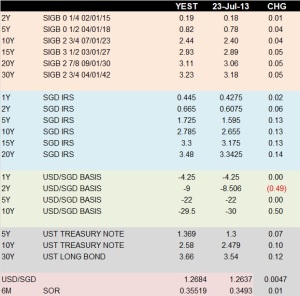 SGD NEER finding its comfort zone led to a quiet week after the weaker CPI and Industrial Production numbers. NEER trading at close to mid now, +4 bp from the centre. The IP has been dismissed as a one off and blamed on the volatile pharmaceutical sector with economists still calling for a decent GDP print on National Day next week.

Rates saw another week of bearish steepening, rising in step with higher US yields. The market pretty directionless otherwise and most players on the side as 6M SOR holds steady. Interest in running the SGD-USD 5y5y spread for widening appears to have resurfaced.

Chart-wise, we have an interesting development of the 2Y irs showing an uptrend, with its 100 day moving average crossing its 200 day which indicates support for its higher trading range. I still like the 1y1y fwd hedge or proxy for the USDSGD. 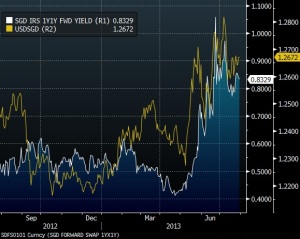 Still makes sense to be opportunistically paid on dips into the month end and into GDP next week.

The IRS fwd fwd chart is showing an unusual blip in the 7Y which makes the 5-7-10 worth looking at. 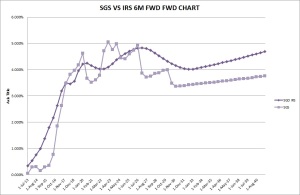 Heading into month end and the bonds are well behaved. Yields outperforming the swaps on the week for bond swaps to widen back out. Volumes on the week much lower as trading interest waned and investment book activity died down and curve activity centreing on the belly to 15Y, with very little interest seen in the long ends.

Still not terribly fond of bonds at the moment as sovereigns continue to flounder globally, abandoned for higher risk instruments. The near term fixation would be on the new 20Y SGS issue end next month, the last long dated issue we will see for the year.