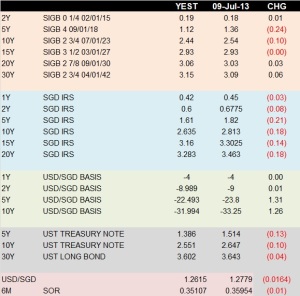 Superb economic numbers crashed the USDSGD from its 12 mth high and crossed 62 bp above the NEER mid point. Point to note is that MAS said in June that the economy “could “continue to be confronted by intermittent bouts of volatility.” And the government forecast for 2013 GDP to grow 1-3% remains intact which means tougher times ahead.

Still the market interpreted the numbers as a sign favouring a strong SGD and rates softened into the week, outperforming US rates which moved down by a lesser extent. Liquidity remains thin with players unwilling to put on positions in the face of the huge market swings we have witnessed in the past weeks.

Like I said last week, running a paid gambit would be futile and it is likely we will see attempts to take out the 5Y 1.5% and 10Y 2.5% supports soon. The 5Y outperformed the rest of the curve on the week along with the incredible 5Y bond rally which was driven by severe market shortage. In addition, we have a UOB perpetual bond issuance for SGD 850 mio and potential for coupon hedging going ahead. As such, the 2-5Y flattening trend could remain intact for a while longer.

The short end rates will continue to be supported by the USD/SGD which I expect will hold at the 1.26 region as ADB and IMF cut the regional outlook and Asian bonds slump around the region.

A crazy rally driven by market shortage after the maturity on 1 July. 5Y yields slumped 24 bp even as the rest of the curve reacted less adversely with the long end, 20Y and 30Y falling in price as US 30Y mortgage rates continue to march higher.

Thus bonds mostly underperformed the swaps with the exception of the 5Y which is a clear indicator of market sentiment which is affected by regional bond troubles.

I still see no reason to be bullish as yet as we head into Humphrey Hawkins tomorrow.

The fwd fwd chart signalling bonds are gaining over swaps in value.

← Ad Hoc Commentary – Singapore still fighting the last war
How To Make Money, According to Zico →