As a follow up to Wealth Fallacy of Singapore Property written in January.

We had a slew of new rules, the latest being the Total Debt Servicing Ratio to cap at 60% while discounting variable income.

I am assuming that Singaporeans earn that amount of money even though our median household income is SGD 7,570 in 2012 per resident employed household i.e. including PRs.

Dual household income of USD 130k, leveraged at 80% and assuming a loan service interest rate of 3% (conservatively) will allow a 24 year mortgage on a magic number of SGD 2 million on a property.

This GDP per capita business bugs me because it assumes that everyone gets to share the GDP which is not accurate (corporate and govt surplus does not belong to us). It also factors in the GINI ratio ie. income inequality aspect and Singapore, at between 0.43-0.45 is on the high side for a developing country (US is at 0.38 after adjusting for taxes).

Singapore is probably higher because it includes the large expatriate community and the higher incomes that they draw.

Singapore is working hard to increase wages in the past months. These tend to apply to the lower echelons of the wage ladder and is unlikely to impact the the overall GDP per capita which is already one of the highest in the world.

“jobsDB today announced the findings of its recent Asian Consumer Market Survey. The survey has found that workers in Singapore are becoming more ambitious and seeking out new, higher paying job roles, even in their later years.” Source : Yahoo

Unless you tell me that Singapore wages have room to go up much further, I say 2 million looks like the sweet spot and it is here to stay.

By 2030 and the 6.9 million, we should have more than enough supply to fit the additional 400,000 families ? Not counting the expected exodus to Iskandar.

The chart below shows the exponential growth in Singapore’s GDP since the late 90’s which is matched equally by the URA Residential Property Index. 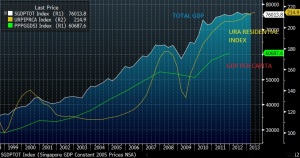 Interestingly, that is also close to what a 1% rise in interest rate will impact on a 25 year mortgage on its loan value.

So back to the magic number – SGD 2 million for the common man.

4 thoughts on “Singapore Housing and the $2 million sweet spot”